These blisters on my hands are time capsules. I study them when I’m not being watched, just to see how long it’s been since I had to grow up. I drop my pick to the ground, and I gaze into my palms. All these years, yet the memories of him still won’t scab over.

He drank the type of tea that could deep-fry untrained lips. He spoke soberly when drunk, and drunkenly when sober. He always put extra salt in his meals, even if the meal was a heap of salt.

You knew him by that wizened gaze of his, and lines like whiskers branching from the outer corners of his eyes; a smile like the jigsaw puzzle of a crescent moon, but with missing pieces; the gravel in his guffaw; his sunken cheeks, already sucked in by the frazzle of old age; a leaning tower of a man.

He was like my grandfather, on account of being too old to be my father. I never knew mine, but I knew him. I knew Baba Masaga. He took me in when I was little, onto his small patch of land. Baba Masaga taught me how to survive; how to brew beer, then barter it for scraps of food. He even taught me to laugh, peppering our mealtimes with levity so that our meals were always light. He was unlike any of the old folks in the neighbourhood, who were all swollen with bitter swill to fling at carefree youth. Not Baba Masaga. One morning, however, he was unlike himself.

I was only seven then; a scrawny kid who couldn’t tell my left hand from right unless under a beam of light. Not bright, but full of ideas. I was who I had always been on that cold morning. Not Baba Masaga.

We boarded a bus without any travel passes that morning. If you grew up where I grew up, there was no greater sin than travelling without a pass on your person. Applications for passes weren’t approved right away anyway, but we had less chances of getting caught on the bus than on foot. No guarantees, but we had to leave. All I knew was that our tiny abode was a cause for arbitration.

They came to our house the day before; two men of imprecise features but exactly the army type. The red-orange hue of sunset behind them did nothing to dull the severity of their silhouettes, or the firmness in their tones. I peeped from behind the door of our hut. Baba Masaga wouldn’t let me near the men, so I couldn’t make out the words in the exchange. At dawn, Baba Masaga and I set off for the bus stop. Our destination was the army barracks.

It was only six minutes away. Six minutes, yet the mounting anxiety sank its talons into reality, slowing time down, fostering silence. The only signs of life on the bus were the engine sounds. We careened along the uneven dust road for about a minute or so, before gradually coming to a stop. As the bus let out a hiss, I heard a loud rapping on the door. I looked outside my window and saw an olive-green truck. There was no mistaking its presence, or the fear in the eyes of its captives. When the bus door flung open, it let in a chilly gust, humid with horror.

A soldier with the face of a schoolboy walked into the bus. He had a rifle slung over his shoulder where a satchel of books would have been. He marched with a menacing authority while scanning our heads. Were it not for his age, the disdain he carried in his eyes would have been his most glaring quality. He stopped next to a woman seated a few rows ahead of me. She clutched her handbag and shrank in her seat.

‘Pass?’ the young soldier asked the woman, who unzipped her handbag in haste, fishing out a card for the soldier to inspect.

After the soldier pored over the card, he gave it back to her, and resumed his slow march. He demanded a pass from an elderly man wearing an equally ancient suit. Just as the elderly man stammered out an explanation, he found himself yanked from his seat, and the young soldier shoved the man towards the exit, booting his backside for good measure. Two more souls met their journey’s end in hostile fashion, before the young soldier set his sights on me.

‘You there,’ he said, charging towards my seat, ‘where’s your pass?’

Words became a jumble in my mouth, crashing into each other, resisting momentum, and digging their heels into my tongue, as if its tip was the edge of a cliff.

‘I don’t recall asking you anything, old man,’ the soldier snapped, scowling at Baba Masaga, before looking back at me. ‘Your pass, show me your pass.’

Again, I tried to speak, but the words clung to the roof of my mouth like a viscous purée.

‘It’s the tonsils,’ Baba Masaga chimed in once more. ‘He can’t even speak properly now. I’m taking him to the clinic.’

Baba Masaga’s quick thinking put me at ease. The clinic was just up ahead, near the turn leading to the barracks.

‘The clinic?’ said the young soldier. He looked at Baba Masaga. ‘I didn’t realise. Only problem here is, I don’t believe you.’

My nerves grew taut again. The young soldier lowered his frame and injected his voice with a grave tone.

‘Show me your pass, old man, or the both of you are coming with me.’

The back of the olive-green truck was the last place we wanted to be. We knew its final destination; life in a labour camp, where only corpses left. There was no reasoning with the young soldier. His cold, calculating eyes made it clear. No escaping them, as he readied himself to pluck the two of us from our seats.

The young soldier glared back at us, my heart racing at his intensity. After a moment, he walked out of the bus before it jerked forward, seconds later.

His wan smile couldn’t conceal the burden on his face. He looked away from me; the soldier had flustered him more than I suspected.

We dropped off at the turn leading to the barracks. I walked alongside Baba Masaga, minding my speed so as not to exhaust him. The road was a slope after all.

‘Tried to take my land away,’ he murmured, as if to himself. ‘It’s all I have; my birthright.’

He looked at me while walking, and said, ‘You must hold on to what matters to you, no matter what.’

We walked past wilted, sparse greenery, and rows of tenement housing on either side of the road, with some of the old structures newly occupied by militia. Five minutes later, we reached the entrance of the barracks. A guard appeared from the sentry post, in time for Baba Masaga’s salutation.

The guard nodded in acknowledgement. ‘Alright, state your business.’

‘Name’s Albert Masaga, here to parlay with the commander over a land issue.’

Baba Masaga used his full name; this was serious.

‘Ward Nine. The commander is expecting me. I have my ID here, if –’

‘No need. Stretch out your arms, both of you.’

After he frisked us, the guard stepped back while inspecting us, and he sucked through his teeth. He pointed behind him.

‘It’s that building over there. Off you go, chop-chop.’

We walked into the barracks, and up ahead, beyond the fence boundary, I saw the labour camp. There was an olive-green truck within the camp offloading fresh detainees. Near the truck were other detainees already at work, burrowing into the ground with their picks. Armed soldiers monitored them with casual indifference. Baba Masaga and I walked past a field and a mess hall. Next to the mess hall was a timber structure which we approached. Even though I was nauseous with dread, there was no turning back. Baba Masaga knocked on the door, and a raspy voice invited us in.

The door creaked open, and the two of us walked into a room of soldiers; two drops of blood in a tank of sharks. A burly man with a moustache sat behind a plain desk. He must have been the commander; the air about him suggested a propensity to bark out commands. His chair held up the weight of his frame and authority, creaking when he gestured for us to sit on the stools across his desk.

‘Mr Masaga, right?’ asked the commander in a raspy voice.

The commander rested his arms on the table and spoke:

‘I’m just a man, Mr Masaga. A fair man stuck in a world that’s anything but. A world which reunites you with a long-lost glove, shortly after you lose the hand it fits. You understand this, don’t you?’

The commander leaned back in his chair, rubbing his chin. ‘Have you thought about our proposal?’

‘Did you come to a decision?’

The commander looked at me and smiled.

‘You must be Willard.’

‘I’m told you’re quite the hard worker at home.’

‘I clean the house, the yard too. I even clean Baba Masaga’s beer clay pots, to remove any leftovers.’

‘Oh?’ said the commander, putting on a cheeky smile. ‘Do you actually remove the beer, or do you just drink it up?’

‘Is there a difference?’

The commander laughed with his men as he looked across the room. ‘I like this kid.’

Shortly after, the commander peeked at the table surface, before saying to Baba Masaga, ‘He’ll do.’

‘I don’t understand,’ I said, before looking at Baba Masaga. ‘What does he mean?’

Baba Masaga paused. He wouldn’t look at me. ‘Just –’ he paused again, letting out a heavy sigh, his head hung low. ‘Just do whatever they say, and you won’t get hurt.’

‘Pleasure doing business,’ the commander said to Baba Masaga, who rose from his seat. ‘You get to keep your land while keeping us happy. Excellent.’

A little knowledge is a dangerous thing. I didn’t know enough about the hearts of men. If I had known the full extent of their darkness, I would have run away under the cover of night. Run to where only crows could reach me and pick my flesh apart if they so desired a taste of despair.

I swivelled my body to follow Baba Masaga, but a hand from behind fell onto my shoulder, pinning me to the stool.

‘You’ll be fine,’ said Baba Masaga, still not looking at me. He trudged on towards the exit with his head hung low. I cried out to him:

My vision blurred, my cheeks wet, my nose ran. I cried out even louder.

Anguish bled into my voice, threatening to choke me, but I couldn’t help myself. Baba Masaga stopped at the exit, placing his hand on the door frame. Slowly, he began turning back, but then he stopped.

He might have sobbed; I couldn’t tell. Soldiers yelling at me to hush drowned out all noises, apart from my wailing.

His back was the last I saw of Baba Masaga. 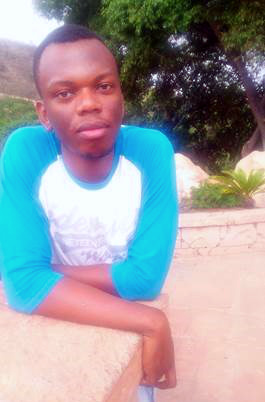 This is Jengo Ata’s first foray into the world of short story writing at a competitive level. His father used to teach English Literature in High School. Jengo graduated with a Bachelor of Science in 2020.